Is beauty truth and truth beauty?

Jobs always considered himself more of an artist than an innovator. His ideas appealed more to intuition than to logic. This is one of the reasons why he always had a larger worldview and could leapfrog the others, because intuition may be considered as the condensed version of logic and feelings. Intuition is what we may call instinct: the impulse that is generated out of the sum-total of our mind. In computer terminology, if the mind was a web service, and it were to be queried for information, I hypothesize the following model to make some sense of it: 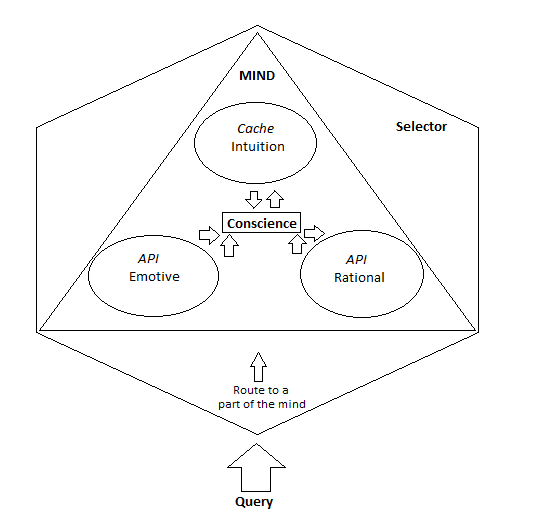 In the above diagram, the mind as a web service (or ‘mind-service’) has four core components: a cache (Intuition), an Emotive API, a Rational API, and a Conscience which cannot be reached directly. Enclosing these four components is a Selector which routes incoming Queries to one of the three components i.e. Intuition, the Emotive API or the Rational API, based on some factors (discussed later).

Whenever we come across an idea, we query this ‘mind-service’. This Query could be modeled as an API call or a lookup. For example, when you read this article, you come across certain ideas that may or may not be new to you. You constantly query your mind for either detailed or summary responses for these ideas. Your input may have either a rational or an emotional or a mixed impression on your mind.

I modeled intuition as a cache because it does not seem to be possible to gain specific detailed knowledge from intuition. Like a cache, intuition gives us a general impression with respect to a specific query (a key-value pair). Meanwhile as we learn and process knowledge, our conscience generates new impressions/insights about this world. As this database of impressions/insights is refined and added to, the cache also stores these impressions/insights, with recency as the key factor deciding their replacement strategy.

The cache can also be in an inconsistent state. To resolve this, there must be constant introspection and observation of the world around to keep it synchronized, otherwise intuition could be misleading too.

The Selector could also route these Queries to our Emotive or Rational APIs. I modeled these components as APIs because there is a certain degree of control with which we could ask detailed queries of these components. We could, for example, summon our Rational API to decipher exactly what conclusions and inferences we could draw from a situation. We could summon our Emotive API to find out our exact emotions which get fired on a particular event. These APIs also draw information from the same database as Intuition does, only with finer granularity. While the Emotive and the Rational APIs are modularized in their areas of computation - namely, feelings and logic respectively - the Intuition is a snapshot of both these aspects of our conscience.

The Selector’s default routing method depends on the kind of environment and experiences the mind has been subjected to. Jobs grew up in the rebel generation of the sixties. He was influenced by experiences as diverse as Zen Buddhism and Bob Dylan. He had an idealistic temperament which was forcefully stubborn. He was open to experiments and ready to imbibe new ideas (but only those to which he was attracted to) quite easily. Coupled to all these diverse experiences was a highly intelligent mind, whose intuition had access to a rich set of insights.

It does not seem to be the case that one cannot change the Selector’s routing choices. A person may also find this to be dependent on his mood and age. A person may even train himself to alter these choices at will.

Given this model of our mind, we now hark back to Keats’s famous idea. Independently, while ascertaining a truth requires a query to the Rational API, appreciating beauty is more of an Emotive API call. Keats is thus making a profound observation: if a truth exists, then it must be beautiful and vice-versa. In other words, when we try to understand an idea / concept, and if that calls the Rational API which results in ascertaining of a truth; then it must also trigger an Emotive API call and vice-versa. The seemingly only way this could be done is through the Intuition. Thus, if Keats is to be believed, the experience of beauty involves an evocation of intuition.

Needless to say, Jobs loved his work. His passion drove him to design beautiful products. This love for perfection was at the base of all his achievements. Love was at the heart of the beauty of his works. It is also quite clear now, why that translated into the intuitive feel of his products. It is easy to understand, based on the model that I have presented, that for a design / product to be beautiful / intuitive, the mind that designed it should be in love with the process. Maybe in the lowest layers of intuition (aka the kernel), there is a universal language which can reach every human being, perhaps what the character Santiago referred to in ‘The Alchemist’. For a designer who loves the art of designing, a beautiful experience should be synonymous with an intuitive experience.

Cooper’s haunted looks sear through. He looks so alone. Out cold inside a black hole, he yearns, and remembers. It is his daughter–back on Earth that he had left with a promise. A promise he now knows he can’t keep. He has failed. ******... Continue →